Skip to content
Creating a Play and Community in 10 Days

A group of performers creates the interior of a house using their bodies. A Croatian performer peeks out from behind them, as if she’s a little girl eavesdropping on a conversation. She tells the audience about a time when she and her brother were young, and he repeated to his father anti-Serbian vitriol he’d heard from his teacher. Their father had fought on the Croatian side in the war in the former Yugoslavia in the 1990s. Two actors playing her brother and father act out the scene as she narrates it. 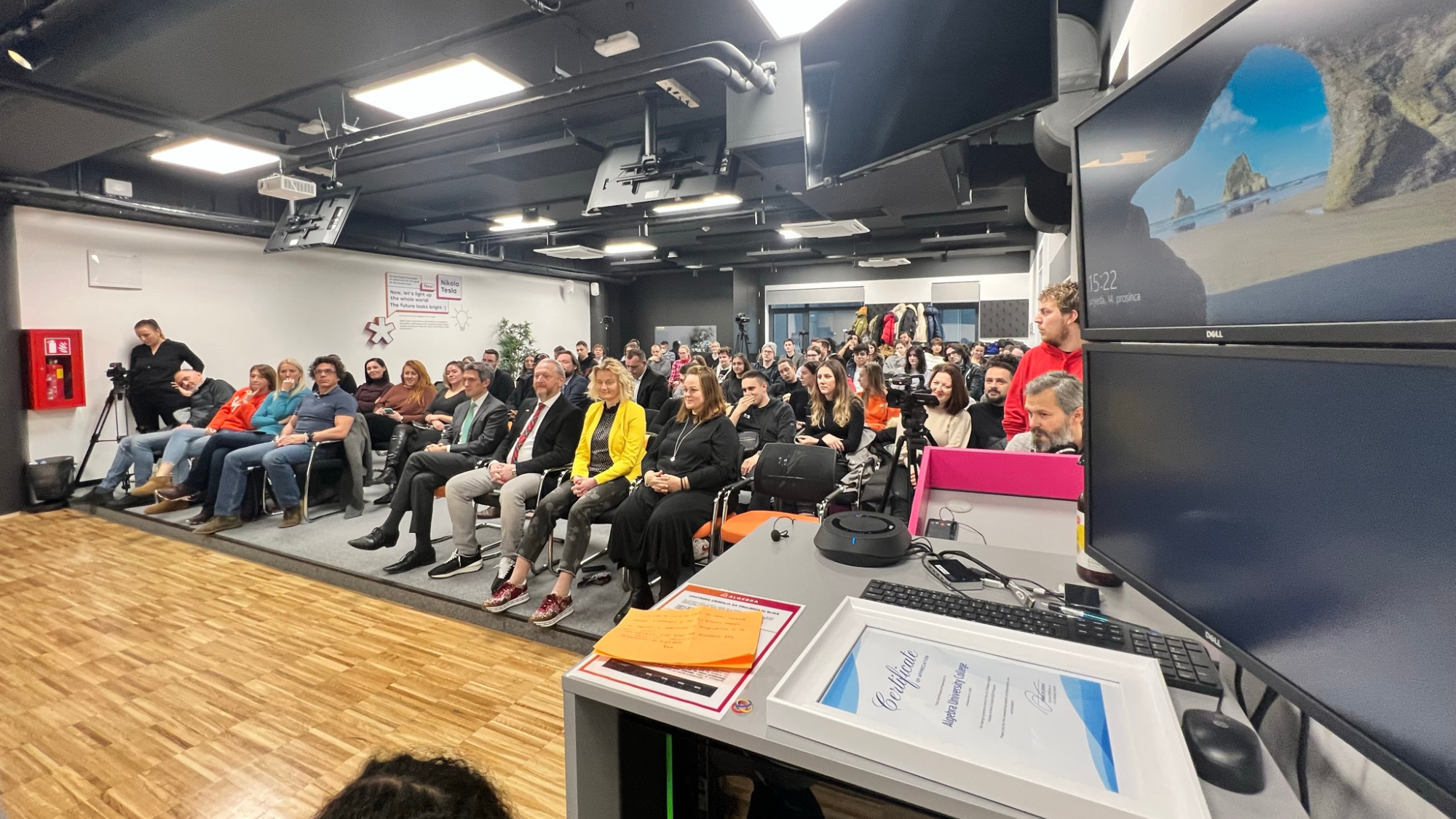 Father: Where did you hear that?! Who taught you that? We are not like that.

Little Girl/Narrator: After he calmed down, he sat my brother down in a big chair and kneeled in front of him. I was very little, and it was the first time I saw my father kneeling. It tore my heart. He told my brother that we shouldn’t generalize people. That people just want to live their lives, and that politicians are the ones who stir wars.

Father: Do you understand?

Little Girl/Narrator: I wonder how the world would look if every parent reacted to prejudice like my father had.

Performer: What gets passed on, and what do we carry with us?

Performer: How does it make us who we are?

These are just a few of the questions posed in Safekeeping, a play created with young adults from Bosnia and Herzegovina, Croatia, and Serbia as part of a partnership between Arena Stage’s Voices of Now program and the U.S. Embassy in Zagreb, Croatia in December 2022.

“We could spend months searching for the perfect play that would explore the topics that are important to a group of artists. But that expertise is already in the room. We write and create that play together. That’s why devised theater is a method of making art that is urgent.”

Fifteen participants, ages 18-24, gathered in Zagreb, Croatia to explore the past and future of their countries – which were once at war – and build connections with one another by making and performing an original, autobiographical play. While some had a theater background, others are studying or working in digital marketing, engineering, math, and the sciences.

Four Arena Stage teaching artists and directors were there to lead the workshops, knit the participants’ stories and discussions into a Voices of Now play, and stage it for an audience…in 10 days. 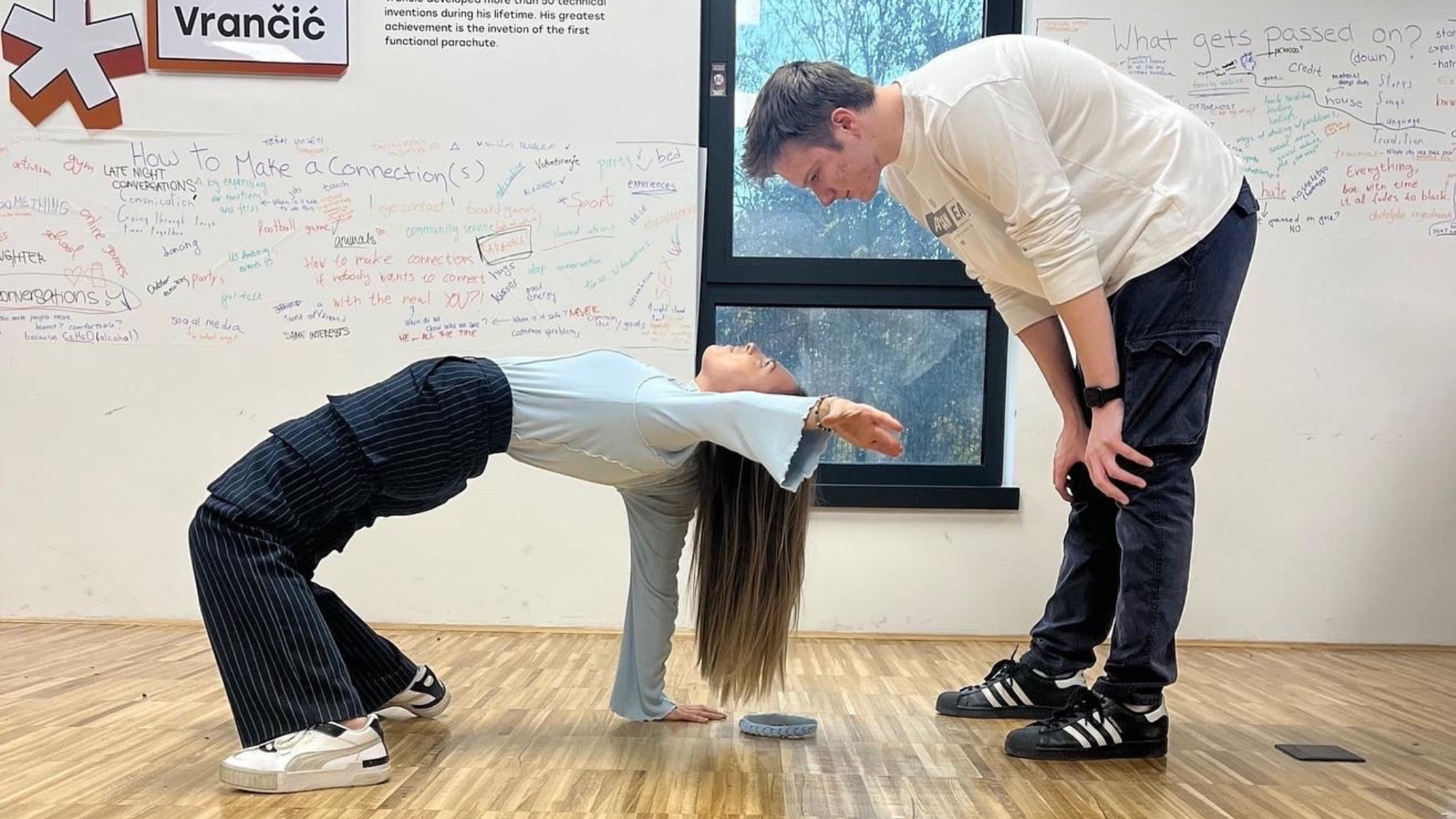 Many traditional plays start with a script written by one or two authors, and then actors are cast. However, devised theater begins with the people in the room, their expertise, and the stories they have to tell collectively.

Forman, often says, “We could spend months searching for the perfect play that would explore the topics that are important to a group of artists. But that expertise is already in the room. We write and create that play together. That’s why devised theater is a method of making art that is urgent.”

VON participants are called “artists” because they train as writers, movers, actors, storytellers, and ensemble members. Over days, weeks, or even a whole year, VON artists build their performance skills as they simultaneously write and block their play. The result is a fast-paced, collaboratively written, physical play that centers on the life experiences of the ensemble members.

During the performance, everyone is on stage the entire time. And because there are no sets or costumes, it is up to the ensemble to illustrate each other’s stories.

At the first rehearsal in Zagreb, one of the Serbian artists, Nikola Andrejić, shared, “I was so excited to come to Croatia to make this play and make new friends. Also, I listen to a lot of Croatian music. I feel some kind of connection to this place. But when I arrived in Zagreb and started walking on the streets of the city, I got scared. What if someone hears me speak Serbian?” 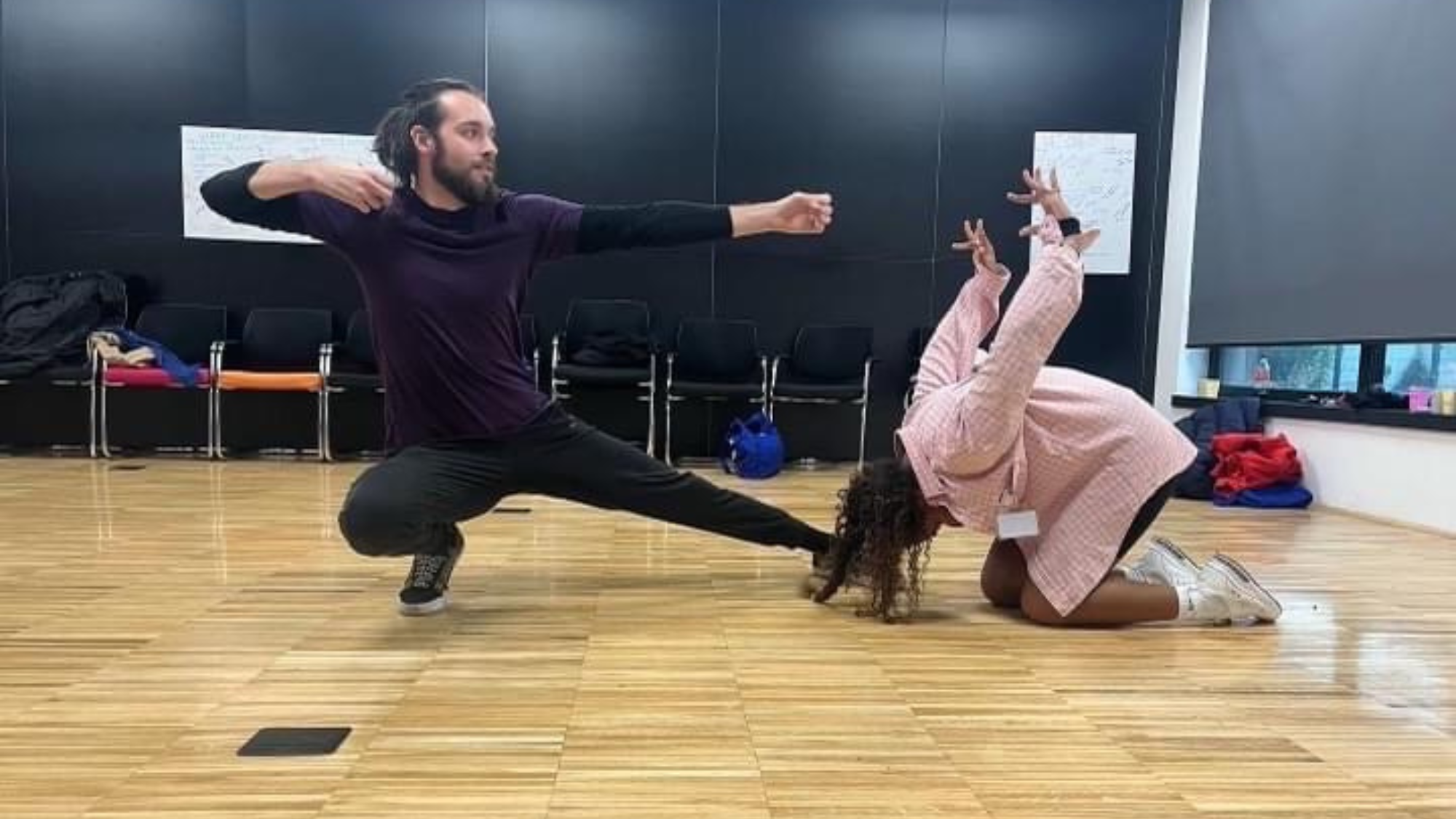 This story was put in the script early in the process. By the time the scene was blocked, on the second to last day, he added the line, “I had no idea how I would feel only ten days later.”

Indeed, the ensemble formed a close and lasting bond as they tackled the challenge of making a play so quickly. They grappled with questions like “What do you do when your future as an individual comes into conflict with the needs of your country?” and “How can you make a difference as an individual?”

Matea Škreblin, a Croatian artist, said, “This was one of the first times in my life that I felt this close to a group of total strangers. Sitting with the group on the first day was nothing like our last day together. It was enlightening for me to meet people from different countries that I thought were nothing like me, but I ended up having friends that really do understand me. I learned to listen to other people more, give them a space to tell their experiences, and talk with my eyes rather than my mouth.” 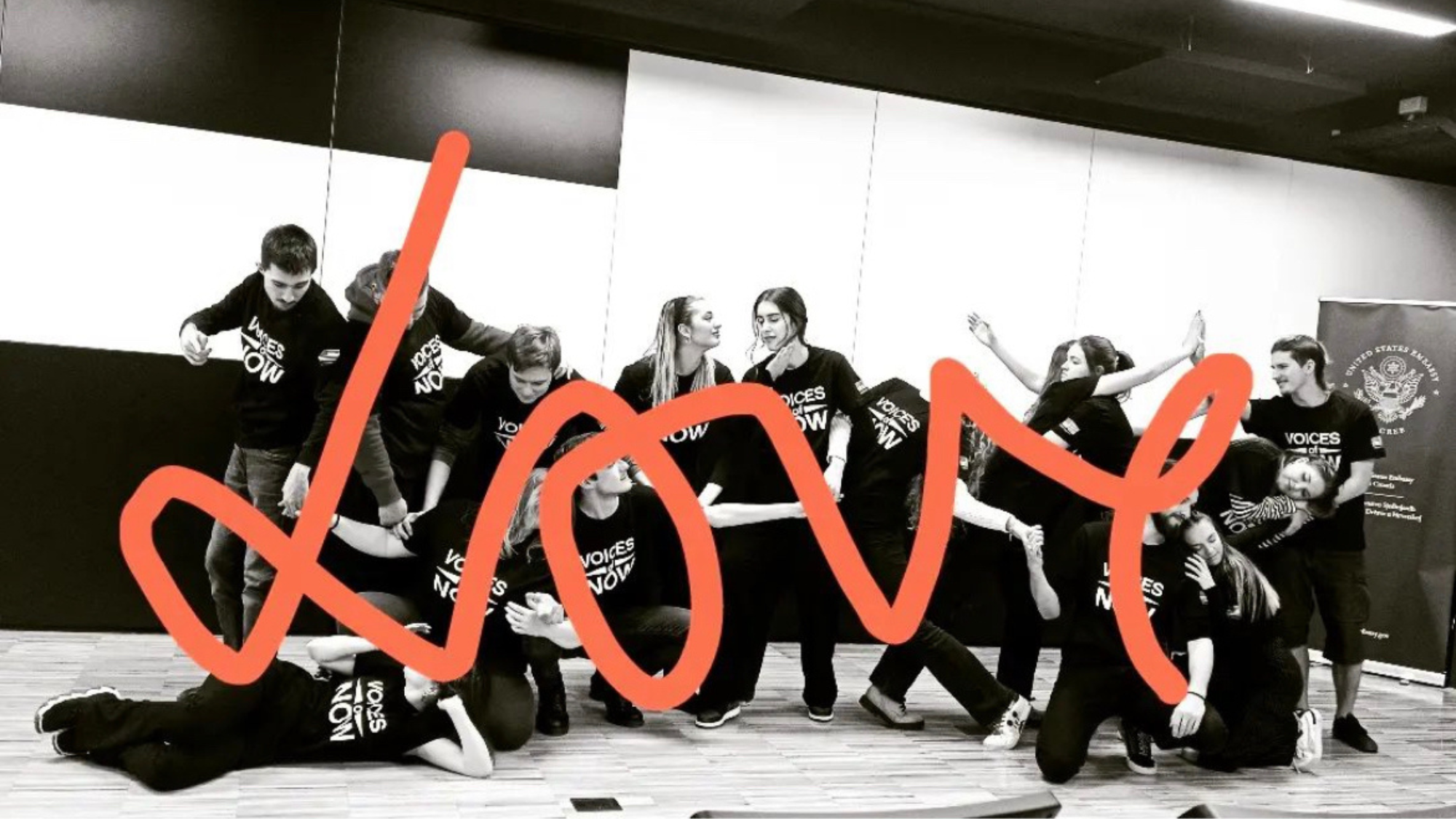 In addition to the art, a lasting community was made

Din Hodzic, an artist from Bosnia and Herzegovina, pointed out that we are receiving messages filled with hate toward other nationalities every day. “In this project we proved that instead of using our differences to hate, we can use them to create something amazing.”

When your country has a war, it becomes part of your global identity. As they explored the impact of the war in their countries nearly 30 years ago, the artists also invited three young people, who are living through war in Ukraine, into their rehearsal process via Zoom. The Ukrainian artists shared how they are working to raise awareness of the war and their experiences via Instagram and other artistic projects. Their perspectives were included in the play in a monologue that described the quiet and intimacy in Ukrainian cafes surrounded by the noise of war. 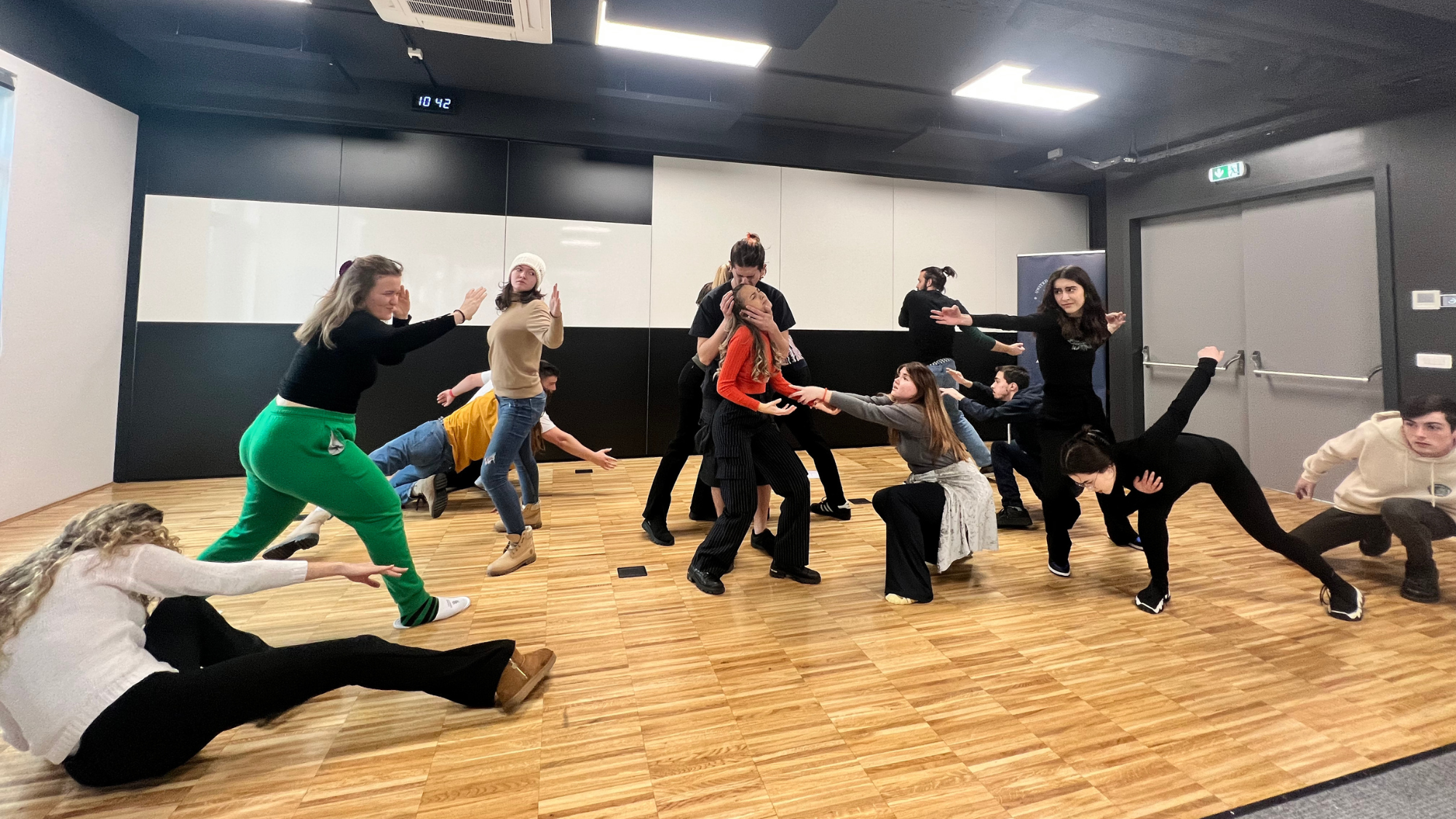 The full ensemble learned to use their bodies to illustrate each others’ stories, including themes like war

Safekeeping was performed at Algebra University College in Zagreb on December 14, 2022 for an audience that included university students, community members, and representatives from the U.S. embassies in Croatia, Bosnia and Herzegovina, and Serbia.

Because the goal of VON is to raise significant questions relevant to the artists’ communities and create positive change in those communities, each performance is followed by a talkback. At the Safekeeping talkback, a gay audience member shared how moved he was by one artist’s story of trying to attend EuroPride 2022 in Belgrade, but being chased away by hundreds of protestors armed with torches and baseball bats. The audience member shared that he had recently experienced discrimination because of being a married, gay man. He was resigned to let it go, but, after seeing the courage of the artist sharing his story, he was determined to address this discrimination.

Matej Boić, an artist from Serbia, reflected on the impact of the play. “I hope our play resonated with the audience. If only one person related to it and said ‘There are things that I actually do not go through alone,’ the impact is already present and it’s big.

“When it comes to the impact that the project left on me, Voices of Now made me realize that there are people who want to listen to how we feel and to understand what we’re struggling with, personally. The way we can help build a community of support, belonging, and trust is if we express ourselves, just like we did in Zagreb.”

Perhaps Arena Stage’s ongoing Voices of Now program can be summarized by that one word: impact. VoN has an incredible impact on the artists, impact on the teachers, and impact on the community.

Learn More
This project marks the eighth time VON has worked internationally. VON directing teams have devised work with artists in India twice (working in four cities each time), Croatia four times, as well as projects in Bosnia and Herzegovina, Peru, and Ukraine. To learn more about VON and watch other devised plays, visit https://www.arenastage.org/voicesofnow. 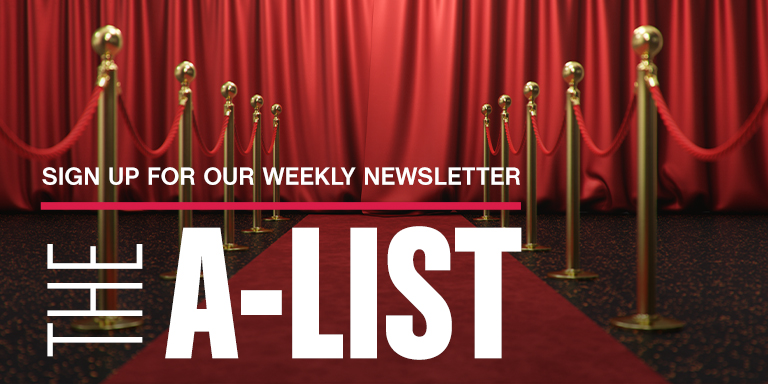 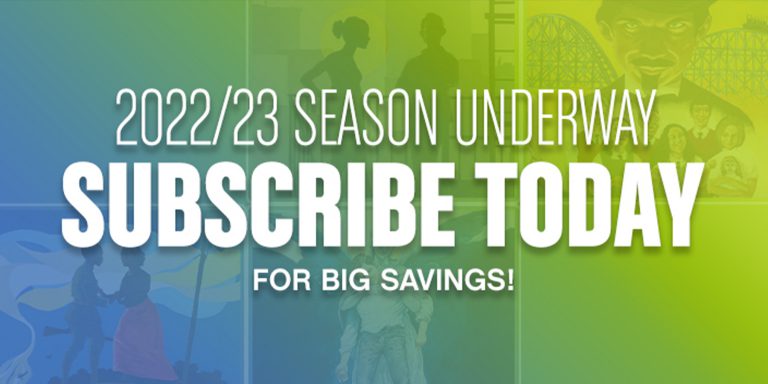